STAT-ON™, a medical device that monitors the motor symptoms of persons with Parkinson disease.

Barcelona, March 1, 2021 – Sense4Care, a leading company specialized in developing and producing wearable medical devices based on the identification of human movement patterns; and NordicInfu Care AB, a Healthcare provider of innovative solutions including medical devices and novel pharmaceuticals, announce a new exclusive distribution partnership in Sweden, Norway, Finland, and Denmark to distribute and commercialize Sense4Care’s Holter for Parkinson STAT-ONTM.

Still today, the lack of precise, continuous data on the clinical status of persons affected by Parkinson’s disease (PD), is one of the main difficulties faced by neurologists in charge of adapting treatment. It is estimated that 40% of diagnoses are wrong in current clinical practice [1]. This obstacle has been now overcome with the STAT-ONTM device.

STAT-ON™ consists of one small non-invasive device capable to capture and process objective data of PD motor symptoms, and automatically generate user-friendly reports easy to read. STAT-ON™ is placed on the patient’s waist using a belt and monitors the motor activity of a person with PD under normal living conditions. This allows the neurologist and other health professionals in charge of supervising the evolution and wellness of the patient, to have objective, precise, and extensive information on the person’s motor state and its evolution, which is complicated and expensive to obtain through other traditional methodologies still used today.

STAT-ON™ has been certified as a CE Class IIa medical device, according to the UE regulatory processes and exhibits the main following capabilities:

STAT-ON™ makes it easy to constantly monitor the ON/OFF fluctuations experienced by patients under treatment and supervision. It also monitors other motor symptoms experienced by them (bradykinesia, dyskinesia and freezing), allowing more precise treatments in early and moderate stages, the detection of early motor fluctuations/dyskinesia, and identification of candidates for Advance Therapies. In addition, STAT-ON™ can monitor gait parameters, falls and other characteristics of movement that allow for improved management of the disease and for significantly improving patient’s quality of life. Since each individual moves differently, the STAT-ON™ is designed to adapt to each patient. To do so, it uses the information that initially receives from the patient and “learns” from their movement. Then, through embedded Machine Learning algorithms, it personalizes the parameters used to analyze and register their motor state. Once this step is completed, the STAT-ON™ works autonomously and is very easy to use. While carried by the patient, it does not require any sort of activation or connection. STAT-ON™ is the result of a full decade of research and development from Sense4Care and UPC (Technical University of Catalonia · Barcelona Tech) and it has been validated clinically in several pilots with the aim of replacing the evaluation methods used to date. Growing incidence of Parkinson’s The incidence of Parkinson’s disease has grown in recent years, largely as a result of longer life expectancies in the general population. Over 7 million individuals worldwide have been diagnosed with this neurodegenerative disease, and of these, 1.5 million live in Europe. This disease causes serious motor problems throughout its evolution and may result in freezing as well as hidden non-motor symptoms including pain, apathy, confusion, difficulty speaking, disturbed sleep and depression. Parkinson’s disease is the second most frequent neurodegenerative pathology, after Alzheimer’s. The last studies indicate that the number of patients will increase exponentially [2]. This fact, along with the high increase of the cost of a PD patient, which is rated at 8.300 € more than a healthy person in Europe on average [3], shows an unsustainable scenario where public health systems will experiment problems to afford correctly. Advantages of using STAT-ON™ In conclusion, STAT-ON™ improves the therapy adjustments by providing better information to the physician, which means improving the QoL, satisfying the patient and increasing the quality of the relationship between the neurologist and the patient. At the same time, the centre can attend more patients, as professionals will have digital tools to evaluate objectively without doing classical evaluations such as diaries, or questionnaires, meaning less saturation of centres due to COVID-19 scenario. Therefore STAT-ON™ can be perfectly considered a tool against the COVID-19 pandemic effects, minimizing the need for physical visits, and making possible the digitalization of data for the first time. 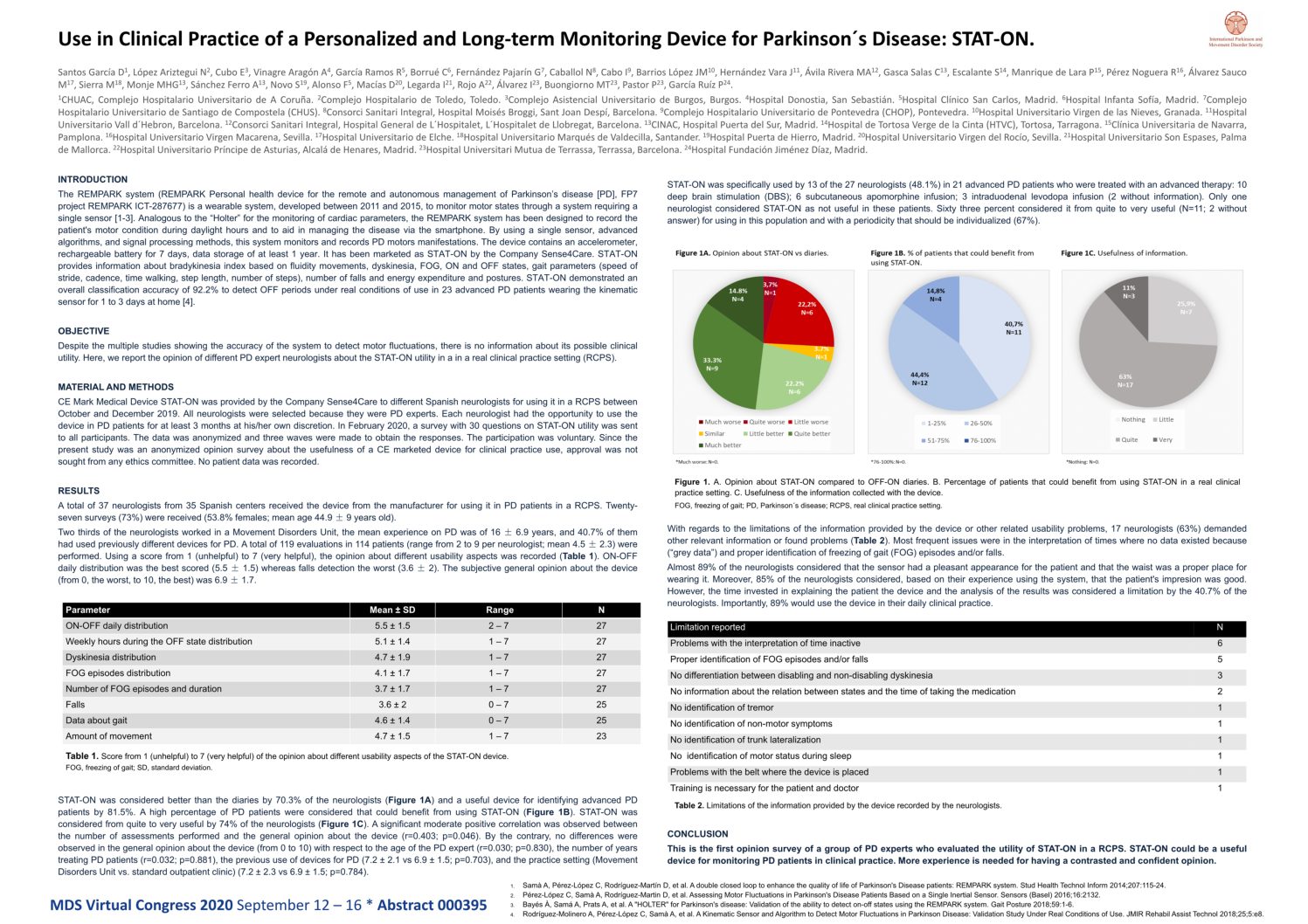 USE IN CLINICAL PRACTICE OF A PERSONALIZED AND LONG-TERM MONITORING DEVICE FOR PARKINSON´S DISEASE: STAT-ON

Objective: To analyze the opinion of different neurologists from Spain about the STAT-ON tool after using the device in a real clinical practice setting (RCPS).

Background: The identification of motor fluctuations in Parkinson´s disease (PD) patients is important for PD treatment but not straightforward. STAT-ON is an objective tool that registers ON-OFF fluctuations making possible to know the state of the patient for a week (1,2).

Methods: CE Mark Medical Device STAT-ON was provided by the Company Sense4Care to Spanish neurologists for using it in a RCPS. All neurologists were expert on PD. Each neurologist had the device for at least 3 months and could use it in PD patients at his/her own discretion. In February 2020, a survey with 30 questions was sent to all participants. The data was anonymized and 3 waves were made to obtain the responses.

Results: A total of 27 surveys were received (51.9% females; mean age 44.9 ± 9 years old). Two thirds of the neurologists worked in a Movement Disorders Unit, the mean experience on PD was of 16 ± 6.9 years, and 59.3% of them had used previous different devices for PD. A total of 119 evaluations in 114 patients (range from 2 to 9 per neurologist; mean 4.5 ± 2.3) were performed. Using a score from 1 (unhelpful) to 7 (very helpful), the opinion about different usability aspects was recorded (Table 1). The subjective general opinion about the device (from 0, the worst, to 10, the best) was 6.9 ± 1.7. STAT-ON was considered better than the diaries by 70.3% of the neurologists (Figure 1A) and a useful tool for identification of advanced PD patients by 81.5%. A high percentage of PD patients were considered that could benefit from using STAT-ON (Figure 1B). STAT-ON was considered from quite to very useful by 74% of the neurologists (Figure 1C). A correlation was observed between the number of assessments performed and the opinion about the device (r=0.403; p=0.046). Proper identification of FOG episodes and falls were the most frequent limitations reported.

Conclusions: STAT-ON could be a useful device for using in PD patients in clinical practice. 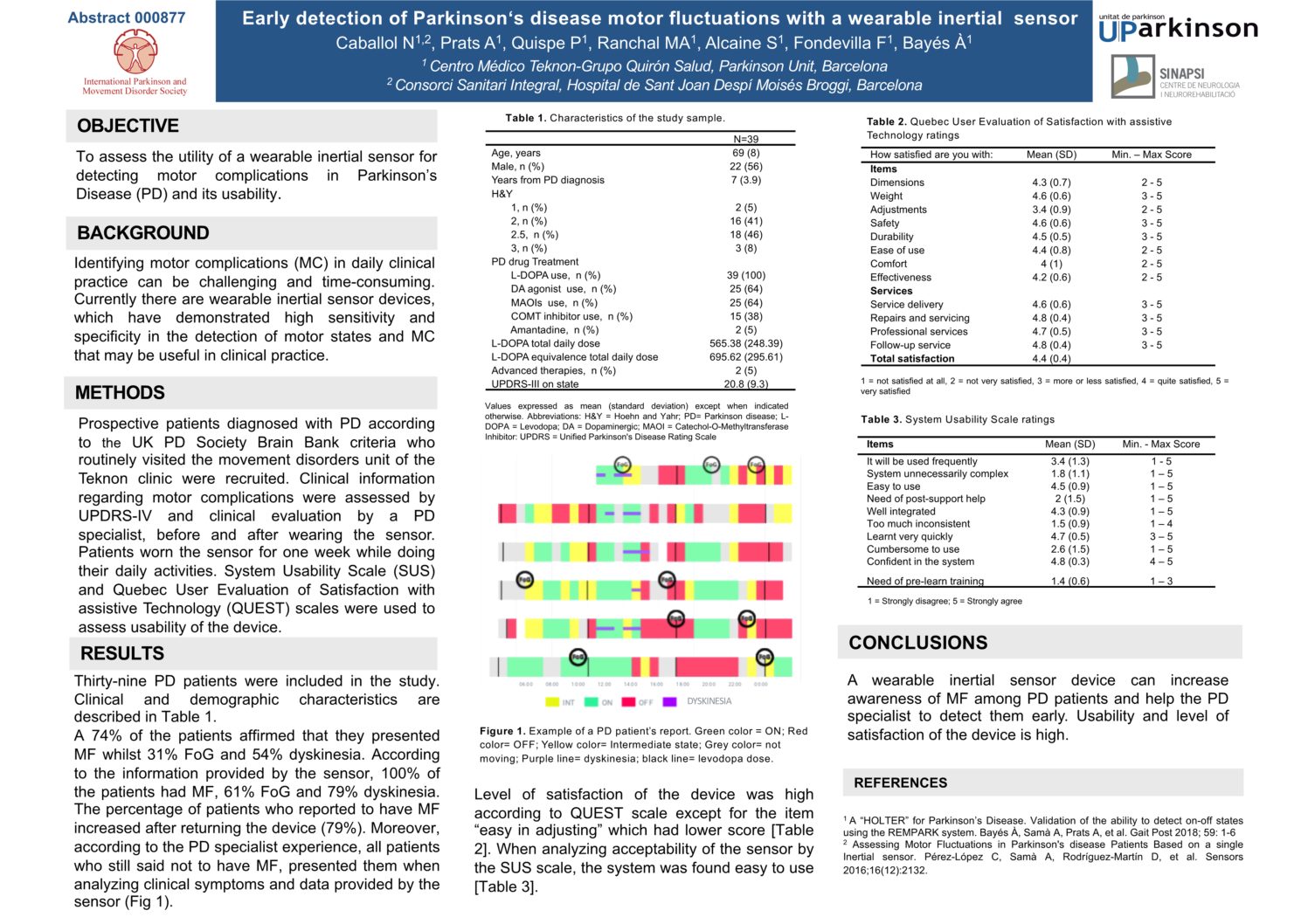 Objective: To assess the utility of a wearable inertial sensor for detecting motor complications in Parkinson’s disease (PD) and its usability.

Background: Identifying motor complications (MC) in daily clinical practice can be challenging and time consuming. Currently, there are wearable inertial sensor devices which have demonstrated high sensitivity and specificity in the detection of motor states and MC that may be useful in clinical practice.

Methods: PD patients diagnosed with PD according to the UK PD Society Brain Bank criteria who routinely visited the Teknon Clinic movement disorders unit were prospectively recruited. Clinical information regarding MC was assessed by UPDRS-IV and clinical evaluation by a PD specialist, before and after wearing the sensor. Patients wore the sensor for one week while doing their daily activities. System Usability Scale (SUS) and Quebec User Evaluation of Satisfaction with assistive Technology (QUEST) scales were used to assess usability of the device.

Seventy-four percent of the patients reported having motor fluctuations (MF), whilst 31% FoG and 54% dyskinesia. According to the information provided by the sensor, 100% of the patients had MF, 61% FoG and 79% dyskinesia. The percentage of patients who reported having MF increased after returning the device (79%). Moreover, according to the PD specialist experience, all patients who still reported not having MF actually presented with them when analyzing clinical symptoms and data provided by the sensor.

Level of satisfaction of the device was high according to QUEST scale. All items scored between 4 “quite satisfied” and 5 “very satisfied” except for the item “easy in adjusting” which had a lower score [Table 1]. When analyzing acceptability of the sensor by the SUS scale, the system was found easy to use [Table 2].

Conclusions: A wearable inertial sensor device can increase awareness of MF among PD patients and help the PD specialist to detect them early. Usability and level of satisfaction of the device is high. 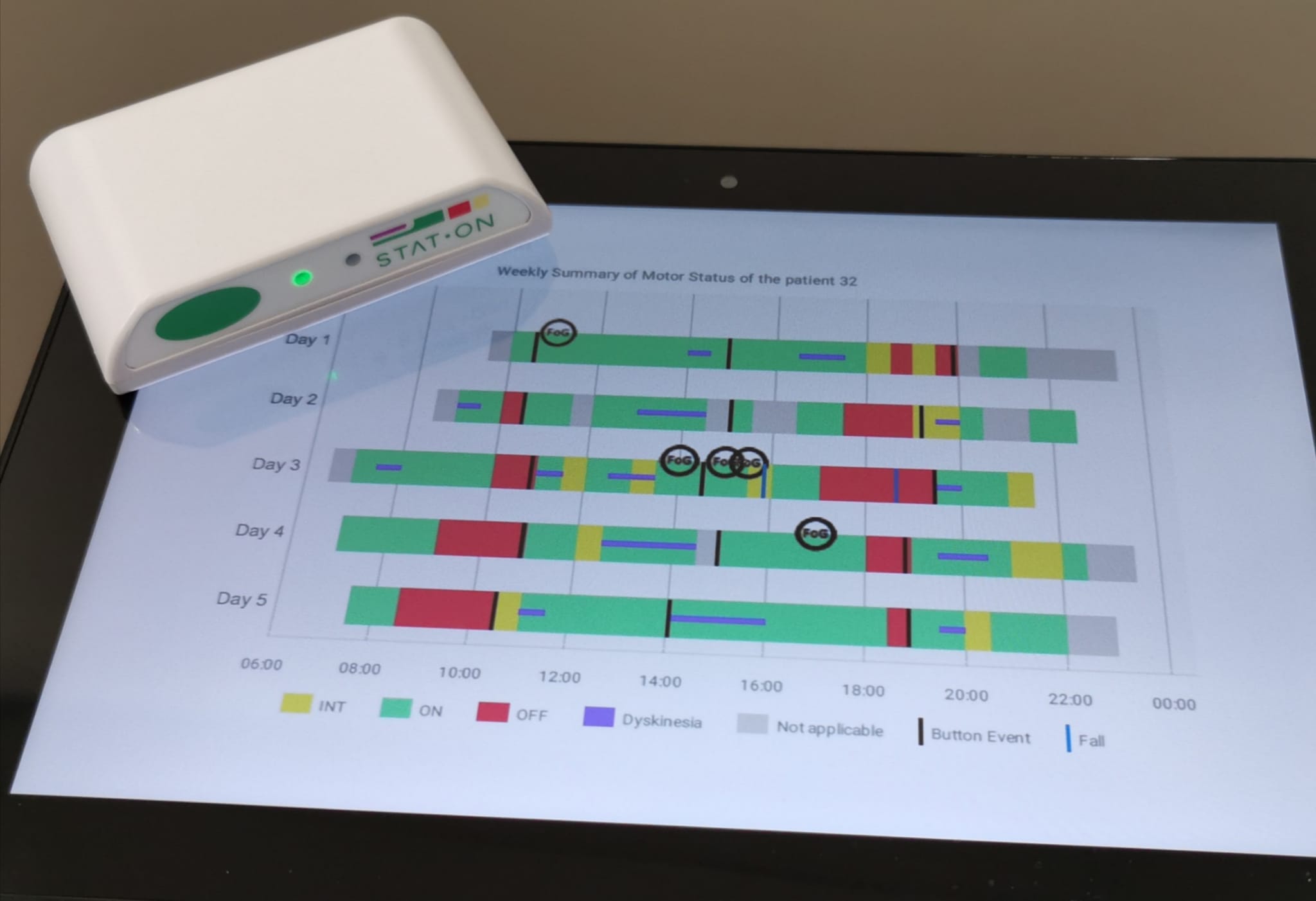 In this 2020 edition of the International Congress of Parkinson’s Disease and Movement Disorders (MDS Congress), that took place for first time in virtual format due to the current situation generated by the COVID-19 pandemic, two posters has been presented by several Spanish neurologists.

Both publications reveal encouraging results regarding the use of new technological solutions for remote monitoring of patients with Parkinson Disease in the clinical practice. In particular, these studies has been implemented with the Holter for Parkinson STAT-ON.

STAT-ON is a medical device class IIa developed and commercialized by Sense4Care, which is capable to perform long-therm monitoring periods at home, using one single device, and without requiring interaction from the patient.

STAT-ON allows the neurologists, and other healthcare professionals, to work on the PD diagnosis with objective and reliable information that give a clear picture of the motor state of the patient, ON and OFF states, Dyskinesia, Bradykinesia, Freezing of Gait, among others, and therefore, contributes to select and tailor the most convenient treatments for every patient. 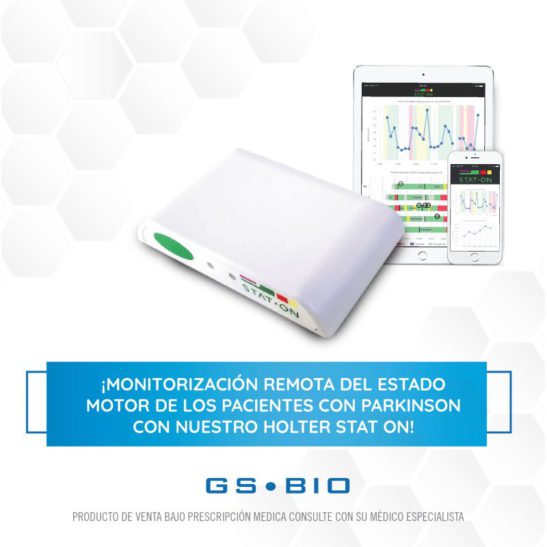 By Joan Calvet in Uncategorized Posted May 11, 2020 Tags

This agreement expands the territories where the Holter for Parkinson STAT-ON is already available, and represents the first notorious expansion out of Europe for Sense4Care’s technological solutions.

GSBIO Implantes Quirúrgicos S.A is one of the main distributors and importers of medical products and supplies in Argentina, offering products of excellence accompanied by a professional service to medical institutions. 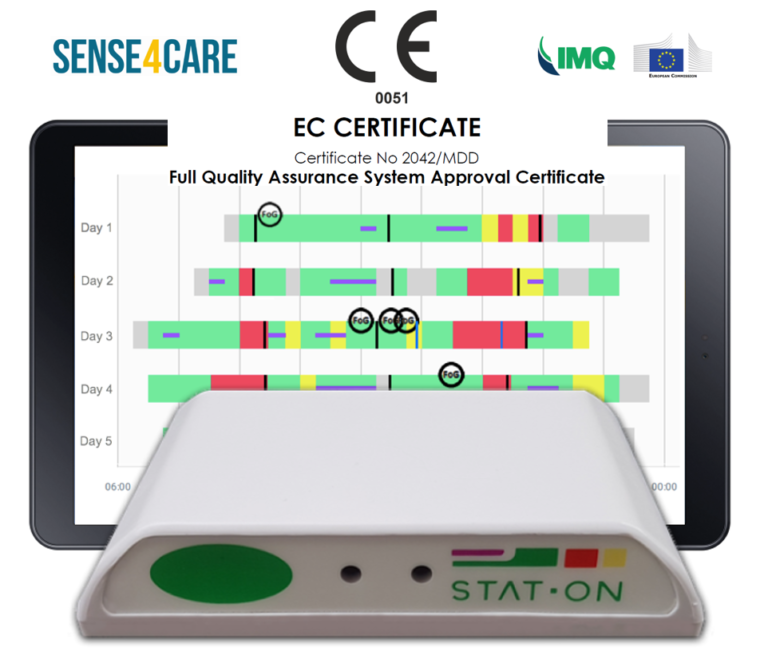 On November, 2017, Sense4Care started the process of certification of the Holter for Parkinson along with Tecno-Med and within the framework of PARK-IT2.0 project, an SME Instrument II project funded by the European Commission. It has taken 1 year and 7 months to overcome all the bureaucratic issues, pass the laboratory tests, achieve the manufacturing license by the Spanish Agency of Medicines and Medical Devices and pass the respective and rigorous audits performed by IMQ S.p.A. A long process, but finally the company has achieved the EC Certificate under the MDD 93/42/CEE and valid until May 2024.

The company which is in the final stage of the PARK-IT2.0 project is starting conversations with neurologists, health professionals, pharmaceutical companies and medical devices companies in order to introduce the device to the market.

Sense4Care is now producing 500 units as a first production of the product already certified. It will be available very soon. If you are interested, send a mail to info@sense4care.com.